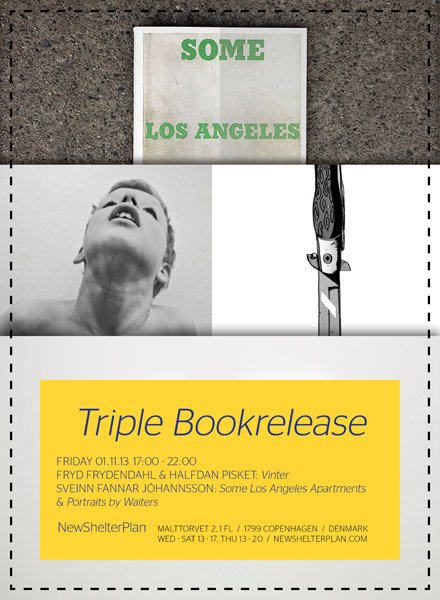 In his two latest publications, Jóhannsson relocates from Los Angeles to Cologne, from exterior to interior. Portraits by Waiters contains images of the artist posing in front of his own camera in different rooms, on different occasions. When reading the photos one will follow his private daily life and may soon notice that he appears as bored, isolated and eager at the same time. In his exploration of photography as a means of documentation and the contemporary use and status of the medium, Jóhannsson has created a visual diary of himself.

Some Los Angeles Apartments is a remake of the original book by the American artist Ed Ruscha, published in 1965. In Jóhannsson’s version, which is as deprived of people as the original, Ruscha’s apparent lack of artistic skill, and his challenge of what it means to be an artist, is taken a step further: The young artist has – in a classic avant-garde spirit – not made any pictures himself. In this way his book is composed as an extension of Ruscha’s own words regarding his publications as readymade collections.

Conversation Books are hip. Herbert Pundik and Martin Krasnik etc. Winter is such, a conversation book. A conversation in pictures between the photographer Fryd Frydendahl and illustrator and artist Halfdan Pisket, born respectively in 1984 in Hvide Sande on the Danish west coast and 1985 in Copenhagen, Amager. She grew up in a thriving family, surrounded by sand dunes and the sea as the closest neighbor, he in a divided family in the metropolis. And it shows in the choice of subjects throughout the book. Where they are talking from.

But the dreams of doing something other than what was in the cards, is the same. There is the same energy, the same will and the same courage to go all the way. But when nothing is a foregone conclusion, one only has his own doubts to align himself with. If it works. That’s the tricky part. Is it good enough. And that is what Winter is examining – the repetitive act of being thrown back into one self, every time you have moved forward, the mind slush. It sets for a gloomy foundation to start from zero. But there is also a freedom in being without inheritance. To choose your own expression, your own mythology, in short: to fantasize.

80 editions by participating artists and publishers on edcat